What is the conveyor belt system 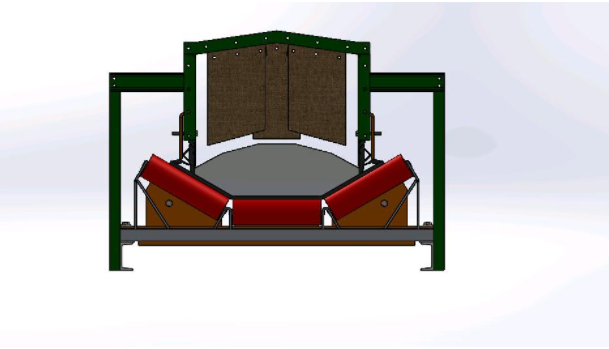 Section I  Components and protection of belt conveyor

The belt is wound through the driving drum and the tail redirection drum to form a endless annular belt. The upper and lower sections of the belt are supported on the upper and lower supporting wheels, and the tension device gives the belt the tension required for normal operation. During operation, the main drive drum drives the belt to run through the friction between it and the belt, and coal and other materials move on the belt together with the belt conveyor.

Structure introduction of each equipment

(1) The polyester canvas core is lined with nylon thread, and the warp and weft threads are intertwined with each other. The longitudinal tension is borne by the warp, while the weft mainly bears the transverse tension. Through this way of weaving, the warp and weft are bent, resulting in great elasticity of the tape. The multi-layer fabrics are bonded with rubber to form a fabric core.

(2) Function of covering glue: it is used to protect the middle fabric core from mechanical damage and the influence of surrounding media. It is relatively thick. It is the bearing surface of the conveyor belt and is in direct contact with materials and is impacted and worn by materials.

(4) Function of side covering glue: when the conveyor belt deviates and the side is in contact with the frame, protect it from mechanical damage. Therefore, it is often composed of wear-resistant rubber.

The quality of the idler affects the service life of the belt and the running resistance of the belt. The maintenance or replacement cost of supporting roller is an important part of the operating cost of belt conveyor. Therefore, its basic requirements are “durable, small rotation resistance, smooth surface of supporting wheel, small radial runout, reliable dust prevention of sealing device, good lubrication of bearing, light self weight and compact size”.

Buy lighting online: What you need to know

The Magic Of a 4×4 Lace Closure Wig