Where Do Your Tax Dollars Go?

By JonathanJanuary 27, 2022No Comments6 Mins Read 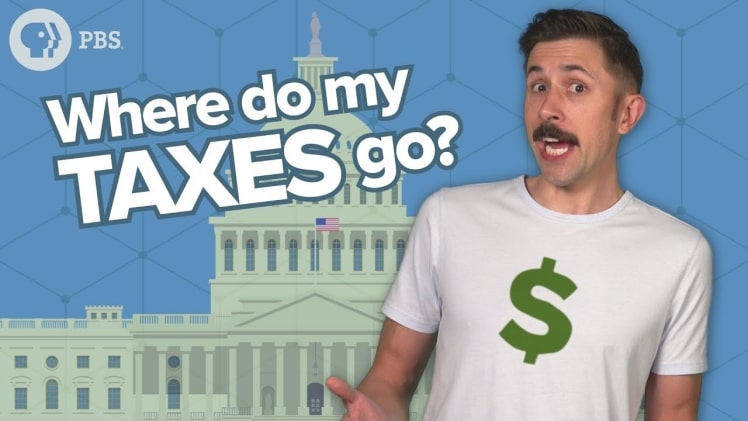 Who exactly are “they”? Of course, the federal government.

And, as you’re complaining about how much Uncle Sam deducts from your paycheck every two weeks, you might be wondering: What are “they” doing with my tax money, anyway?

That’s an excellent question, especially given that the IRS collects around $3.5 trillion in federal taxes each year from hardworking taxpayers like you. That’s a trillion with a capital T!

The IRS might appear to be a riddle wrapped in a mystery, inside an enigma: money goes in, money comes out, but what happens in between is anyone’s guess.

That is, until now. It’s time to lift the curtain and see where your tax dollars are going.

What Is the Purpose of Your Federal Taxes?

Isn’t it quite broad? Let’s dissect it and discover where your money actually ends up, but do not let this question keep you from chasing your dreams.

The interest on the national debt, which the federal government must pay each year, is affected by two factors: the size of the debt itself and increasing and declining interest rates. And, because both the national debt and interest rates on that debt are likely to rise over the next decade, so will the amount of our country’s interest payments—implying that more of our taxpayer money may be required to make those payments.

Let us now discuss entitlements. These are the benefits and services provided by Social Security, Medicare, Medicaid, and the Veterans Administration. They’re called entitlements because the government deducts money from your salary to finance them, and you’re entitled to them if you satisfy specific criteria.

This area of spending has increased dramatically since 1962, and there are two key causes for this. First, new entitlements like Medicare and Medicaid (which began in 1965), the earned income tax credit (commonly known as the EITC, which began in 1975), and the child tax credit were implemented (1997). Baby Boomers reach retirement age, begin collecting Social Security benefits, and enroll in Medicare, the population receiving these benefits has skyrocketed.

All of these reasons, plus a few perks for our military veterans and COVID-19 relief programs, increased required expenditure to more than two-thirds (70%) of the federal budget in 2020.

Social Security was established to give income to retired people over the age of 65, and it accounts for a significant portion of required expenditure. It is intended to augment your income if you retire or become incapacitated. Your dependents would get benefits if you died before becoming eligible.

People who get Social Security payments include:

Social Security taxes and payments are linked to inflation, which means they rise when prices rise. Even so, the average monthly Social Security payout for seniors is approximately $1,555. 7 So, if you’re counting on Social Security to pay for your retirement aspirations, you should reconsider!

There’s no getting around the fact that healthcare is expensive, especially in retirement or for Americans striving to make ends meet. This is when Medicare and Medicaid come into play.

Medicare is a government health insurance program that covers a wide range of people, mostly those over the age of 65. Who foots the bill? The majority of it is on your dime! Medicare is funded by a 1.45 percent payroll tax on all incomes and an extra 0.9 percent tax on earnings above $200,000 ($250,000 for married couples).

Medicare and Medicaid account for 20% of the federal government’s budget, totaling more than $1.3 trillion to cover around 139 million Americans through combined programs.

These are the major programs supported by required expenditure. While some of the money for these programs (such as Social Security and Medicare) is deducted automatically from your pay stub, others (such as money for veterans’ benefits) is deducted from paying taxes on your earned income and capital gains

Furthermore, more of our veterans’ benefits are supported by discretionary expenditure. In that regard.

How is your tax money spent? Discretionary expenditure is the final piece of the jigsaw. Every year, as they debate spending legislation, Congress squabbles about who receives how much money. In other words, these programs are subject to the discretion of Congress, which means that they can decide to boost or decrease funding for certain programs as they see fit.

Let’s take a look at some of the primary areas of discretionary expenditure.

This covers the cost of roads and bridges, as well as air traffic control and the Department of Transportation. We must travel about in our aircraft, trains, and vehicles!

These monies are mostly channeled via the Department of Education and cover anything from teacher wages to college grant money. Regrettably, this includes support for federal student loans.

How to File Your Taxes

Whew! You now have a better understanding of where your money is going. We understand that taxes are complex, but that doesn’t mean they have to be unpleasant. (Aside from the fact that you don’t have that money in your bank account.)

We can help you take the worry out of tax season, whether you require help from a tax expert or your tax situation is simple enough that you can file your taxes using tax prep software.

Why lab made diamonds are trending in 2021