5 Mistakes to Avoid in Online Rummy 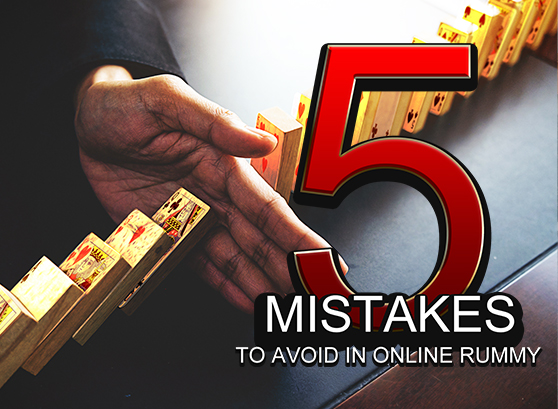 The game of Online Rummy appears quite easy to learn and play at the initial stage. Once a player starts playing it regularly, they realize that it is a complex game of skill. Online Rummy is a skill game that tests your intelligence, and decision-making ability and helps to enhance focus at a similar time.

Mere information on how to win the Rummy won’t help you ace the game. There are heaps of knowledge you need to grab to become a champion of Rummy. But, before playing any Rummy variant, players are required to know about some common mistakes they can commit in cash games or tournaments.

Below are some points on mistakes made by players while playing Online Rummy:

Playing practice games is important for every player whether you are a beginner or an experienced player. This will help in getting familiar with the rules and strategies of the game so that you can play well in any challenging situation. In addition, you also get a chance to learn new strategies while competing with real players.

To Play Rummy, players are required to have perseverance, patience and most important skills. Playing with high-value cards increases your chances to lose higher points. In 13-card Rummy, cards carrying high values (10 points) are A, K, Q and J. The best way to get rid of high-value cards is to discard them during the first few turns.

At the beginning of Rummy, the wild joker is selected randomly and plays a very important role in Rummy. If you are dealing with a wild joker, make sure not to discard it. This is because several players often confuse it with another card in their hand and discard it by mistake.

Rummy is a fast-paced game in nature and due to this, the chances of making such mistakes will be higher. If you discard a wild joker, you reduce your possibility of making a needed combination quickly. Therefore, it is suggested that you simply take a close look at your cards before discarding them.

There are several players who declare their cards quickly and end up making an invalid declaration. Players are usually in a hurry to declare their hand before anyone else at the table. They end up declaring their hand without taking the time to check the cards properly. If a player makes an invalid declaration, it will cost around 80 points, which is the highest penalty points one will incur in Online Rummy. Therefore, it is suggested to inspect your cards closely before declaring them.

Sometimes, players make or break games by using their multi-tasking ability. While playing Rummy, a player should keep focusing on his/her cards as well as other players’ cards. This strategy can help a player to understand what combination a rival player is trying to make and also identify the next possible move in the game.

If a player ignores the moves of other players, he/she can lose the game by falling into their tricks. For that reason, it is so important to take a close look at every move of opponents.

If you are a novice to Online Rummy and searching for how to win Rummy in a better way, try not to make the above stated mistakes. Start your journey of Online Rummy with practice games before you master it then move forward to play cash games or tournaments.

If you are looking for the best app to practice the Rummy game online, you should try Rummy Passion’s free and unlimited practice games.

What are some of the most common mistakes that people make while buying testosterones online?

How to Engage Your Kids at Home

Top Things to do in Andaman Islands 2022