How To Expertly Sort Cards In Rummy? 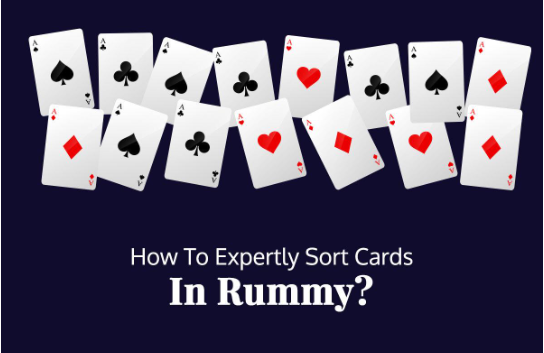 Rummy is a delicate game of cards and quite the rage on offline and online platforms. Making melds is the sole aspect of Rummy, where it gets especially different and quite challenging from other widely available card games.

Making a good sequence or set requires getting your hands on the best Rummy cards and making them count in the most lucrative fashion possible. In the game, Joker can be used as a Trump card which helps you complete a sequence. If you get it early in the game, you can also use it while you are in the middle of sorting. In Rummy, it is a common but not that wise of an act to bank on Joker cards during sorting. Jokers are rare to come by and should be used at other crucial stages of the game.

The rulebook for playing Rummy is quite simple. To understand the game’s basics, you have to know how to play Rummy by heart. Sorting cards is the number one skill in Rummy, and knowing the basics to the core is bound to get you ahead of your rivals in the game.

In this post, you will learn about how to sort cards expertly in Rummy to improve your chances of winning.

Understanding what Sorting is

To start the game, the player gets 13 cards. The player can sort them by using a sort button in online games, which is quite convenient. However, in the online section, the players have to be more cautious and aware of the type of cards they are dealing with. The minimum of sorting these 13 cards in this game is four combinations.

If you are already in possession of a Joker, it is easy to make the initial sorting if you have an average hand. It would help if you tried to separate the initial deal in your hand into three segments which is the average preference. Arranging them in your hand into various possible sequences makes it easier to remember the future builds you would want to create in the game. There are also many distinct tactics to sort cards described below that will help you out if you’re confused with the many levels of variance in the game.

You can also meld cards to begin your sorting in Rummy. Melds are easy to perform and quite effective when playing the game. Melding can occur if a player has three to seven cards in Rummy that belong to the same rank. This aspect of meld makes it valid. For example, a meld can be of a set of kings, but obviously, they do not have to come from one suit.

Arranging for melds early in the game is an effective way to get ahead. It allows you as a player to put much pressure on the opponent’s side so that they are forced to make a move. Melds have proven to be quite effective when the player is initiating the game. Experienced players have been found to have a keener eye at melding, so you have to keep playing the game more to understand the patterns.

Sorting 3 or 4 card combinations from the same suit

In this type of play, you should sort the cards with combinations from the same suit. It is somewhat a more accessible and more obvious way of sorting, but it is pretty compelling. If your luck favors you, which mostly does while using these types of sortings, you can easily find out good luck in the undisclosed deck, which can be availed when your chance of draw comes. It boils down mostly to what sort of cards you have in your hand, and therefore it is like more of a logical play banking on a bit of luck from the future draws. The initial dealing that your hand gets determines if you do this sorting or not, but in most instances, it is helpful and aids you in making better sequences faster.

Separating the cards with no matches is essential as soon as you get the hand. To do so, you must check with whatever options you have and chalk out all options that are not viable for your winning. Random cards propose quite a complex problem to the players, and it is tough for them to select initially what to keep and what to discard. Often, players make the mistake of drawing and discarding in a rush, so it is hard for them to make a sequence while keeping track of the cards. It is best to get the unmatched cards arranged in the suit to maintain a cognitive record in your mind, and you do not get distracted by the cards you draw or the ones that are discarded on the table.

When you play Rummy intensely or regularly, you will find that sorting is a continuous process, and you have to keep doing it several times after every couple of rounds. Sorting helps you keep everything in order and maintain your stance in the card game to avoid getting confused by your opponent’s gameplay and the draws you might make. It is a hard-biting truth that effective sorting can win you a game of Rummy. It is essential to understand that there could develop any new sequences at any moment of the game, which will force you to change your hands accordingly.

A step-by-step guide for starting your own podcast

Pre-Built vs Custom; Your New PC

4 Ways Technology Has Changed Marketing for the Better