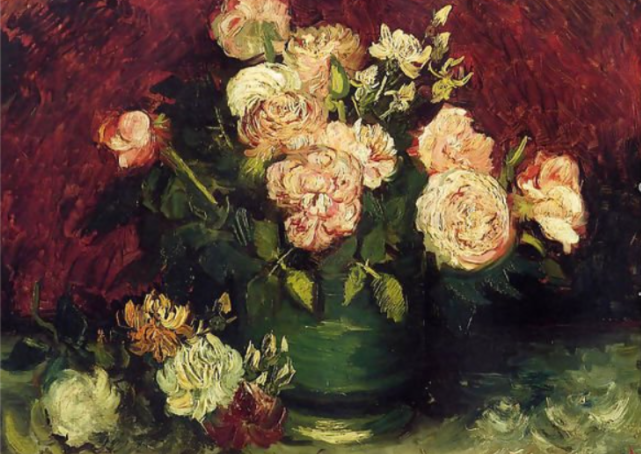 Art critics and art lovers have said that where others saw ugliness, Van Gogh saw beauty. Throughout his artistic career, he wanted to portray poor and ordinary people. The portfolio of Vincent van Gogh’s artworks reflects this theme. It can be seen in the Vincent van Gogh drawings, but primarily the Van Gogh paintings convey this theme. His “Potato Eaters” is a good example.

But apart from his portrayal of ordinary people, he also created beautiful artworks depicting flowers and other nature-related themes. His two series of sunflower paintings are examples of his love for flowers and nature.

One can get an idea of Van Gogh’s vision of himself, his illness, and the world around him by analyzing when his artworks were created.

“The Starry Night” is at the top of many art lovers’ list of best Van Gogh paintings. It is believed to be one of the most famous paintings of van gogh. Currently, it is exhibited at the Museum of Modern Art in New York and is the museum’s most viewed painting.

“The Starry Night” (1889) was painted when he was voluntarily in the mental asylum at Saint-Rémy-de-Provence a few months after mutilating his ear. It depicts a spectacular swirling night sky that is filled with expressionist-style spirals. It has a strong emotional effect on most viewers, which is probably why so many art lovers often return to its painting or reproduction.

But despite these theories, “The Starry Night” is regarded as one of the Western World’s most valuable artworks. Interestingly, Van Gogh himself regarded this painting as an unsuccessful experiment. He eventually spoke of the painting as a “failure” in a letter to fellow painter Émile Bernard.

The “Potato Eaters” is one of the earlier paintings of Van Gogh and is an example of his works related to ordinary and poor people. Although “Potato Eaters” is not as colorful as his later works, it is considered another of Van Gogh’s most famous paintings. He created the artwork in 1885 and revealed his Dutch roots.

In that stage, Van Gogh was still heavily influenced by artists from the Hague School, and he depicted the realities of peasant life as it was – coarse and sometimes ugly, but always authentic in a domestic setting. He created this work before he became under the influence of the Impressionists.

According to many art critics Van Gogh’s “Almond Blossoms” is one of his most beautiful paintings. The painting might have originated due to his obsession with Japanese art. Japanese woodcuts and prints greatly influenced Van Gogh. The work’s inspiration can be traced back to this Japanese art style.

“Almond Blossoms” was created in Van Gogh’s most productive career era. It was painted in Southern France at Arles. He experienced Arles as “the Japan of the South” because of all the sunlight and trees in the area. When he first arrived in Arles, the fruit trees began to blossom, and he immediately began painting them at an unprecedented rate. It is an example of his love for nature and plants.

The painting was created when his nephew, the son of his brother Theo, was born. Van Gogh saw the birth of his nephew as a very joyous occasion, and “Almond Blossoms” is a Van Gogh painting in which you can see hope, joy, and serenity – characteristics not so often found in his artworks.

Van Gogh’s “Irises” is full of light, life, and natural beauty. It also has a hint of Japanese influence, like “Almond Blossoms,” and is spectacular.

“Irises” was also created while he was voluntarily in an asylum. After he had checked himself into the asylum, he immediately began to work on this painting. Although Van Gogh referred to the painting as “the lightning conductor for my illness,” he considered it only as a “study.”

His brother, Theo, realized it was exceptional work and sent it to the Société des Artistes Indépendants. It was later exhibited alongside “Starry Night Over the Rhône.”

“Sunflowers” is not one painting but two entire series of multiple paintings of sunflowers. Usually, when someone refers to Van Gogh’s “Sunflowers,” they’re talking about the series he created while in Arles. It consists of four versions and three repetitions of the same idea.

The other sunflowers were painted when Van Gogh was in Paris between 1886 and 1888. Therefore, this series is known as the “Paris Sunflowers,” The sunflowers in this series are not in full bloom but are pretty and spectacular.

Van Gogh was seemingly delighted by sunflowers. This assumption can be made from his letters to his brother, sister, and other friends. He loved painting sunflowers, and everyone knew it.

As Van Gogh created more than 1,100 drawings and sketches apart from his more than 900 paintings, one can’t analyze all his works. Still, by looking at and discussing some of his most famous artworks, one can understand why creating paintings was his passion and a way to deal with his illness.

Why you should buy beginner-friendly wigs, undetectable lace wig

How You Can Start Leading a More Sustainable Lifestyle

8 Of the Best Antivirus Software Packages For Business