Fintech and Regtech: What is the Difference? 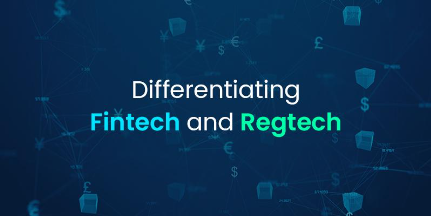 The financial industry is growing with an expected percentage of 16.8 viz. $681 billion by the end of 2028. It is no longer a technically backward sector that is slacking off the advancements. From cashless transactions to online loan sanctions, everything is now possible in FinTech.

Whereas, RegTech businesses raised over $18.9 billion in fundraising deals during the course of 2021, which is, double the amount raised in 2020. Both technologies are in demand and running successfully in the financial (especially banking) sector. But how are these two technologies differing from one another?

Let’s understand the meaning of FinTech and RegTech before distinguishing them.

Financial Technology, (in short, FinTech) seeks to procreate and automate financial services. From companies to business owners to individuals, use the facilities of algorithms in FinTech. These technologies are used in devices, such as computers, tabs, or phones by consumers to enjoy the real benefits of FinTech.

Though used in the financial industry, RegTech is however not the same as FinTech.

“A subset of fintech that focuses on technologies that may facilitate the delivery of regulatory requirements more efficiently and effectively than existing capabilities,” says the UK’s Financial Conduct Authority. But to make it easier for you, RegTech indicates the technology that ensures the management of all the regulatory processes of the financial industry.

Both technologies have had a great impact in the 21st century, especially when COVID emerged as the mighty doom, but separately. They are different from one another. Now you have a brief understanding of their definitions, let’s take a look at their differences.

Both the terms ‘FinTech’ and ‘RegTech’ are currently gaining a lot of attention. But how are they different and still so popular?

The Evolution of FinTech and RegTech

Speaking of RegTech 1.0, the period of 1960 to 2008 was quite effective. As it kept booming and made the financial industry more efficient,  RegTech 2.0 emerged right after the wave of the global economic crisis.

RegTech growth has been mostly driven by business operators looking to cut costs associated with compliance, but the next phase is expected to be led by regulators looking to strengthen their competence for supervision.

To start with FinTech:

The more developers focus on FinTech software development and RegTech development, the financial industry will be to operate the financial processes and regulations. However, things have improved a lot since 2008 and there are several innovations in both technologies for financial institutions.

Of course, there are more to come in the future for both technologies.

What Did We Conclude?

RegTech is often said to be a branch of FinTech but in reality, both are not the same. They are two separate technologies doing their bits, staying parallel to one another. Fintech automates financial services and RegTech, unlike FinTech, provides solutions to businesses with financial regulations.

We often get confused between the terms, ‘FinTech’ and ‘RegTech’ because, they are used in conjunction. The thin line of where FinTech ends and RegTech starts is so blurred, they are usually gauged and discussed under the umbrella of innovation in the financial industry.

Now that you know the difference and are ready to dive into the wave of financial innovations, hire FinTech developers and RegTech experts to give your company a new financial platform.

UNDERSTANDING THE PROS AND CONS OF SMART HOME TECHNOLOGY

What Does a Software Company Do?

What Is Software Company?

The Different Types of Websites You Can Create

5 Alternatives of Plastic Straw That are Eco-Friendly

Best Braid Wigs For Getting The Desired Look