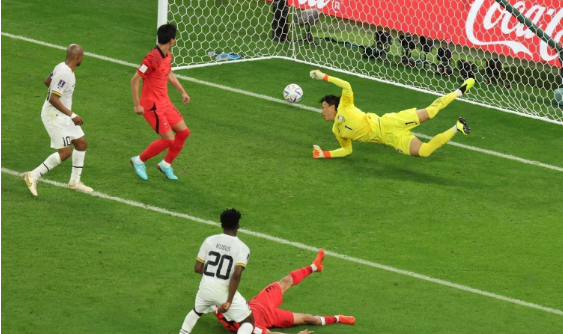 Ghana landed their second goal in the previous fixture of the World Cup Qatar 2022 against South Korea after Kudus took a header for 31-pass moves.

Group H has sent off Portugal to the last 16. Only one more team can proceed. Ghana has a chance to be that team, especially after the incredible show displayed by the entire team. The 31-pass move ending in a close-range header has become the talk of the town. It took 91 seconds, but the wait was worth it amid the desperation to gain a lead of 2 goals.

Jordan Ayew sent the ball to Mensah for a cross. Mensah rebounded it to Kudus, who sent the ball to the net, landing his first-ever goal for the afternoon. The FIFA World Cup Qatar 2022 is inching closer to the knockouts with such an adrenaline rush that it was unexpected.

Patience was the key, Addo is happy to see that his side has got that in tons of amounts.

According to the prediction report, South Korea was fevorite for the football betters.But, Ghana scored 3 goals in response to a double netted by South Korea’s Cho Gue-sung. The attack began in the 58th minute, with an immediate follow-up in the 61st minute. It looked like the side was back in the game. Kudus left no stone unturned to prove that statement wrong. He misguided S. Kim to tackle the defense for his other goal.

Both sides mirrored a formation of 4-2-3-1. Williams remained a silent attacker while Salisu and Kudus added three goals to the board. Ghana will next face Uruguay on December 02, 2022. Both teams are eyeing a spot in the top 16, but only one will make it to the end. Portugal is already there with 2 wins against Ghana and Uruguay.

Opta Analyst initially sparked the viral video with 31 passes. It then saw the internet go crazy, with fans urging the world to celebrate this incredible strategy. The fact that South Korea did not interrupt the passing at all is a bit shocking. It is now a part of Fun Facts. To add to this, Ghana has surpassed the record of 14 pass-goals that was scored against the US in 2014 by Andre Ayew.

The final lap against Uruguay is a cliffhanger. Even though Uruguay comes from a defeat of 0-2 against Portugal, the team does have the potential to do wonders. Ghana lost to the same opponent 3-2 against them. It bounced back with a victory over South Korea in the second fixture. Ghana is a four-time American champion and wants to take the trophy home. That is a far-fetched dream, but anything can happen at the FIFA World Cup Qatar 2022.

Argentina lost to Saudi Arabia, and Germany tasted defeat against Japan with a final tally of 2-1. Not just that, the side could only draw the result by 1-1 against Spain in its second World Cup event. Germany can only qualify if Japan loses to Spain and it wins over Costa Rica.

Let the town buzz with the ongoing viral video of Ghana’s incredible 31-pass goal until the next event.

Secrets And Tips For A Successful Date With A Japanese Women

Bloom and Groom: 5 Flowers to Have in Your Garden

5 Reasons to Use Brass Cookware in Daily Life