Revealed: The top 10 embroidery styles in the UK

By SabithFebruary 25, 2022No Comments5 Mins Read 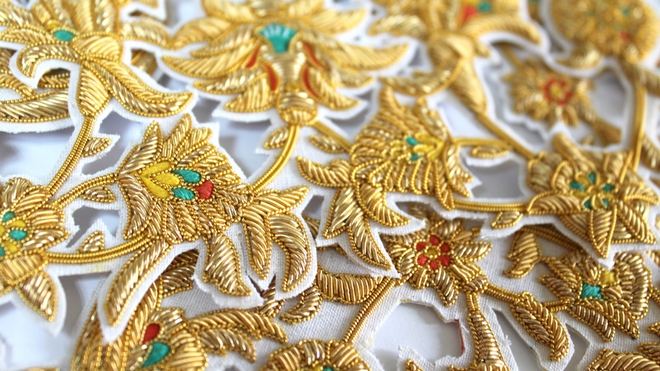 Research finds most popular style of embroidery by far, is border

According to research by embroidery design suppliers Design Bundles, the most popular embroidery style is border.

The study was carried out by analysing search terms for different styles of embroidery, including “chain stitch embroidery”, “cross embroidery” and “bead embroidery”, finding “border embroidery” in first place, with 2,900 UK searches in an average month.

That’s 2,310 more searches than ninth-place “applique embroidery”, which was searched for 590 times in a month.

Crewel, French knot and sashiko are the next most popular embroidery styles, each receiving 1,000 UK searches in a month.

Chain stitch was searched for 880 times in a month, as was cross stitch. Bead and blackwork follow, with 720 UK monthly searches each.

Hand embroidery is an ancient art form, which traces back to the third century BC, however it’s seen a rise in popularity in recent years, largely due to visual social media platforms, such as Pinterest and Instagram.

Like many other types of crafting – such as painting and knitting – embroidery is thought to be beneficial for mental health. It’s a therapeutic and meditative artform, which can alleviate stress, keep the brain active, reduce anxiety, lower blood pressure and decrease heart rate. It can even help the brain recover from injury, enabling stroke victims to restore neural pathways.

Almost anyone can learn to embroider. Once you’ve mastered just a couple of simple stitches, you’ll be able to create an endless amount of patterns and designs. Probably the easiest embroidery stitches to learn are running stitch and back stitch – both of which can be seen in many embroidery designs because of how useful and versatile they are.

What are the top 9 embroidery styles in the UK?

Here’s how many times each embroidery style was searched for in the UK in an average month:

How are the different styles of embroidery used?

Running along the edge of the fabric, border embroidery is most commonly used to decorate clothes, tableware and quilts.

Crewel wool is thicker than cotton or silk embroidery threads, to create a raised, textured effect.

Some of the different crewel embroidery stitches are satin stitch, which is used to fill out areas, and chain stitch for creating outlines.

This decorative stitch gives a woolly effect, so it’s perfect for creating texture and is often used to create flowers and fill in shapes.

Also known as the “French dot”, “twisted knot stitch” or “knotted stitch”, it’s one of the easiest knots, yet one of the hardest stitches to master.

As its name might suggest, sashiko originated in Japan, with farmers using it to mend their clothing. Since then, it’s continued to be a practical art form, most notably being used in Northern Japan to strengthen layers of cloth and make clothes warmer.

Dating back to the third century BC, chain stitch is an ancient craft that remains popular today.

Chain stitches are a series of loop stitches which form a chain-like pattern. Because they can make curved, flowing lines, they’re commonly used to mimic drawing, however they can be used in macrame, crochet and needle lace too.

Traditionally, cross embroidery was used for decorating items like tea towels, tablecloths and cushion covers, but now you’re more likely to see it framed and hung on the wall as artwork.

A type of counted embroidery, it’s done by creating little crosses to make a tiled design, and is considered to be the easiest type of hand embroidery.

Bead embroidery has been used to decorate clothes and other textiles for thousands of years.

Some of the most common items that are embroidered with beads are bed sheets, trainers, baseball caps and handbags. Bead patterns can also be stuck onto hard surfaces to decorate things like boxes.

While bead embroidery is technically an embellishment on an already existing item, it can be used to make jewellery by adding structural supports like bracelet bands.

Blackwork embroidery was popular in England in the 16th century and was used to decorate shirts, cuffs and collars with geometric or floral designs. Its lacy appearance meant that it was known as “poor man’s lace” before Katherine of Aragon popularised the term “Spanish blackwork”.

It mainly consists of two types of stitches: Outline and filling, and common blackwork designs today include chessboards, maps, roses and Tudor houses.

Applique was originally used on clothing to strengthen worn areas or patch holes, before moving towards a decorative artform with the embellishment of blankets and quilts.

Ancient examples of appliqued leather were found in Egypt, dating back to the 10th century BCE, with leather and felt applique discovered on saddle covers, carpets and wall hangings in the 4th century BCE tombs in Mongolia and Siberia.

The term “applique” originates from the Latin word for “I apply”, and as the name suggests, it involves sewing or sticking differently-shaped pieces of fabric onto a larger piece to create a pattern or picture.

Today, it is most commonly used to decorate garments.

For Beginners, How To Choose the Perfect Glueless Wig

What is the best way for beginners to wear curly wigs?

How an Upholstered Frame Is Better Suited For You?