The Blockchain in the Supply Chain 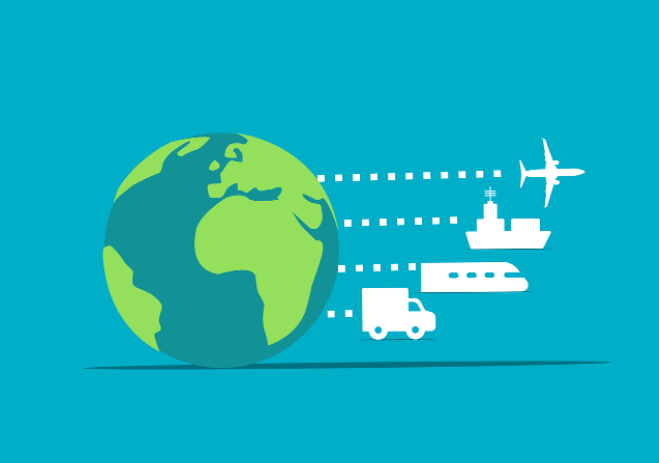 In 2018, the Capgemini Research Institute predicted blockchain’s mass adoption – by 2025, supply chains worldwide would be managed with the complex technology, it said.

But while use cases are proliferating, only a small minority of companies are using the technology, which is touted as tamper-proof.

We give you an insight into how blockchain works, application examples in logistics and show you alternatives for secure networking.

How Does the Blockchain Work?

To identify the added value of blockchain for a supply chain, it is important to understand how a blockchain basically works. Basically, it is a database that secures against subsequent manipulation through a process that connects all records.

The technology is like an openly viewable ledger of transactions that can be done with a Kraken crypto bot – automatically, while remaining safe. Activities are grouped into blocks and linked to other transaction blocks (block), ultimately creating a chain.

The “transaction chain” is encrypted and stored decentrally on all computers involved in the blockchain.

For example, supplier information is directly linked to delivery data, inventory as well as financial information. Production, trade, logistics service providers and banks can be integrated into a common network where they can view all the data of a transaction.

This “chaining” not only verifies the data, but also makes subsequent manipulation virtually impossible.

The Supply Chain as an Area of Application for the Blockchain

According to numerous experts, blockchain technology offers great potential for economic sectors in which the secure transmission of data and information is required – such as supply chain management.

Here, value creation is increasingly taking place across companies: The flow of materials is controlled via various interfaces by ERP or cloud systems, and the exchange of sensitive data is advancing rapidly.

This increasing networking is leading to an increase in contact points where manipulation is possible. Nevertheless, only 11 percent of companies are currently using innovative technologies such as blockchain.

Benefits of Blockchain for the Supply Chain

The trustworthy exchange of data is difficult in practice, as different IT systems are often used, and different security standards apply

A common communication architecture based on blockchain can facilitate the processes. However, a completely own and individual blockchain solution is only possible with an enormous implementation effort and a very high degree of digitalization.

Blockchain platforms are suitable for benefiting from the technology independently of the company’s own internal IT systems. They can streamline administrative processes.

This is because blockchain platforms are generally accessible worldwide and enable all participants in a value chain — to network with each other and exchange data in a secure environment.

To ensure that partners only receive the information that is relevant to them, data that has been entered can also be made available selectively.

The benefits of a blockchain platform solution:

Application Examples for Blockchain in the Supply Chain

Blockchain is fundamentally suitable for all areas of logistics, and some industries have begun to establish individual blockchain applications despite the expense.

For example, there are application examples for improving supply chain traceability in fish production, transparent traceability of organic cotton, or securing the pharmaceutical supply chain against drug counterfeiting.

In addition, a quite prominent, because successful, example is the joint venture of the software manufacturer IBM with the Danish shipping company Maersk.

The blockchain-based information platform they developed for sea freight, called Tradelens, is already successfully in use and is now considered a prime example of the application of blockchain in the supply chain.

Documents such as bills of lading, shipping data and customs documents can be stored on the blockchain-based platform.

Involved trading partners such as shipping companies, terminal operators or customs authorities have real-time access to the information and can also view the IoT data of their cargo, for example, to obtain up-to-date information on temperature or humidity.

Before the technology can realize its potential, however, it must overcome a number of hurdles. First, a major hurdle lies in the technology itself: In general, the blockchain stores records along the entire data chain – each record is linked to the previous one.

This is what makes the blockchain so secure, but it massively limits the number of possible transactions per second because of the enormous amount of computation and energy required to store them.

For time-critical real-time transactions such as commodity tracking, blockchain technology is therefore not yet fully mature.

Implementing and developing a blockchain application also requires a very high level of digitization and detailed expertise, which many companies are likely to have only to a very limited extent.

Another challenge is the integration of the technology into already existing digital structures. Since the data of various parties must be integrated, there is an increased need for communication and cooperation, to which all partners involved must comply.

The extent to which this will work in practice is questionable. According to studies, only 46 percent of companies are currently prevented from sharing data with their partners by security concerns as well as a lack of trust (43 percent).

Alternatives to Blockchain in Logistics

Blockchain definitely offers a competitive advantage to sensitive industries, such as the banking sector or companies from the pharmaceutical industry, due to its tamper-resistance.

However, as the development of proprietary solutions is very complex and cost-intensive, as well as requiring expertise, companies will probably tend to rely on alternatives in the future.

Cloud-based SCM platforms, for example, also offer the possibility of transparent networking of all supply chain players involved – detached from the company’s own IT structures.

Particularly sensitive company data can also be protected against access by unauthorized persons through additional security measures and defined authorization concepts. The use of ERP clouds can also further advance the networking of supply chain partners.

The high complexity of the technology and the required level of digitalization make the implementation of blockchain in the supply chain difficult.

Besides, there are effective alternatives that enable cooperation and the resulting transparency with much less effort. Against this background, it is questionable whether the mass dissemination predicted by Capgemini will really take place.

Why you need an international payroll service for your business

How to Affordably and Effectively Build an E-Commerce Website?

Six Gesticulations That You take a New Carpet in Dubai

6 Reasons for Renting a Private Yacht