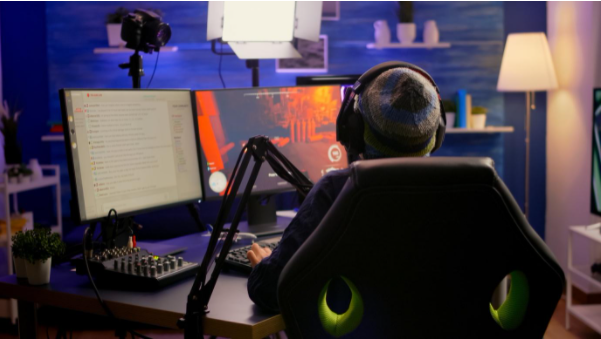 The appeal of playing video games isn’t hard to fathom. They’re exciting, engaging and, in many cases, offer complex storylines, believable characters and detailed graphics as well as challenging gameplay. However, many people struggle to understand why anyone should want to watch other people play video games, peering over their virtual shoulder as they work through the latest premium title on YouTube or Twitch.

Nevertheless, live streaming and watching videos of gamers both professional and amateur is extremely popular. Twitch, the leading games streaming channel, had 2.78million average concurrent viewers in 2021, while a staggering 1,460 billion minutes of gameplay were watched over the course of the year. This was a 31% increase on 2020, and the site’s popularity is still on the rise.

Just as people like to relieve stress and have fun by playing live bingo and taking advantage of the best bingo bonus offers, so watching video games can be escapism in its purest sense – a passive, fun way to let off steam without the anxiety of making a mistake or getting your character killed.

It remains the case, however, thatfor many people, video games aren’t considered a spectator sport. Yet there’s no reason why video games shouldn’t attract the same audience as activities such as football and baseball. The rise of esports bears this out, and it’s perhaps easier to understand why people would watch video games when there’s a clear competition between players and teams.

It can be just as engrossing to watch an amateur player, whose skill level may be no greater than your own, working their way solo through a store-bought game as it is watching high-level pros competing against each other. This is especially true if the amateur player has a neat line in banter and self-deprecating humor.

Science tells us that we have mirror neurons in our brain that enable mimicry. These neurons also fire when we watch other people engaging in an activity such as playing video games. We experience the highs, lows and thrills vicariously, as if we were playing along. These mirror neurons encourage empathy, so we share in the player’s triumphs and sympathize with their losses.

Try before you buy

Streaming someone else playing a video game online is also a way to see what it’s really like to play before you spend money on getting the game yourself. A live stream is more realistic and authentic than a demo. If you already have the game but are struggling with it, then watching another player is a great way to pick up tips or learn new strategies.

Finally, live streaming games makes fans feel part of an online gaming community. Often, there’s the opportunity to interact either with the player live streaming, or with other viewers in real time. This is one of the key waysthat a mostly solitary, stay-at-home hobby can feel truly inclusive and universal.

So, don’t knock the hobby of watching other people play video games online until you’ve tried it yourself. You might just discover that it’s your new favorite pastime.

What are the most popular sports health supplements?

The Best Airlines In The World 2021

What Essentials Must a Facility for Senior Housing Fairfield CA Possess?