9 Types of Men’s Hats for All Occasions 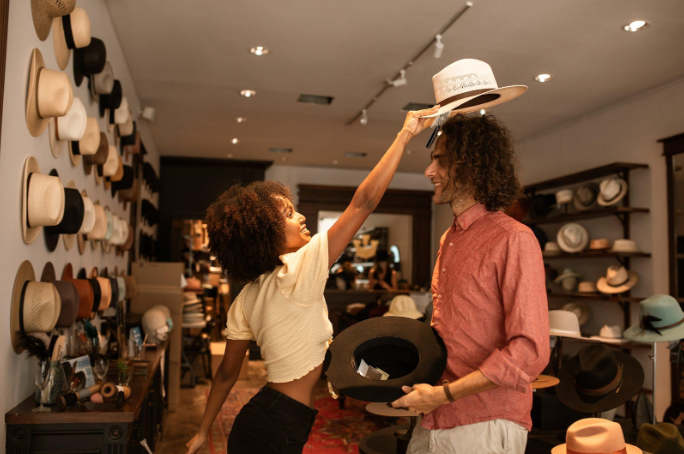 Amazingly, men’s hats are quite a difficult conundrum for even the most fashion-oriented male. Although peripheral areas such as watches and shoes provide several acceptable options, it is often one or two ordinary hats that can tip off a particular outfit fashionably.

There are numerous hats you can choose from. However, the problem is knowing which hat for men suits every outfit per occasion. Each part of a hat has its purpose, which could be for aesthetic reasons, comfort, or pure function.

Buying a hat is synonymous with having a haircut for the first time. The experience can be initially scary. But as soon as you understand the idea, it becomes a walk in the park. On this note, let us examine various big hats for men that are appropriate for every occasion.

9 Types of Men’s Hats for All Occasions

A Panama hat is usually light in weight and color, and it is a stylish hat that passes to be your best warm-weather friend with a beacon of fun-loving energy. They originally hail from Ecuador and are always made using the plaited leaves of a toquilla palm plant. Technically, the toquilla palm plant is not a palm plant, but it is close to it.

As a result of where it’s being made from, the Panama hat is highly breathable and sturdy in construction. It is a summer and spring-time accessory which also blends greatly with seasonal wear.

The bucket hat is one that has made its return triumphantly. It is one of the perfect hats for men who desire to carry their casual outfits to a higher level. It is just what its name suggests: A bucket hat has the form of a hat.

Depending on your choice and the brand of bucket you look to flaunt, this stylish accessory can either be dressed up or down. A bucket with the branding of a designer is a solid statement for the fashion conscience.

The bucket hat has a brim that slopes downward, and it lends itself to those with paler skin tones, and the heavy-duty construction implies that you will not have to be worried about it at music festivals, as the case may be.

The pork pie hat is a well-deserving inclusion to the list of lovely hats for men. Its name was derived by carelessly resembling the British pork pie. As a close cousin to the fedora, these round and small men’s hats host flat crowns which crease along the inner top edge. They also host crowns that curl slightly upward.

When it comes to pork pie hats and suitable combinations, it often finds their place within the smart casual outfit code.

The Boonie hat (also called booney) is a type of traditional slouch hat. They originate from military use, especially those that have once served in hot tropical and desert environments. The Boonie hat and bucket hat are similar in construction, but this hat has some extra tricks up its sleeves.

If you have, perhaps, run out of space as a man, you will be able to store anything with the Boonie hat, which hangs from the comfort of your melon. This is now to acknowledge the webbing of the Boonie hats, which surrounds the crown area and frequently extends to the brim in particular.

The trilby hat occupies its tiny arena in the space of men’s hats. It sports a low-angle brim and a pure retro vibe. It is also arguably the most stylish hat for men.

You may think that trying to pull off the trilby hat is going into dangerous territory. Still, it has become one of the most excellent hats for men and one of the more socially acceptable pieces of headwear. Whenever you find a trilby with the perfect shape, fit, and proportions, it always looks pretty beautiful.

This type of hat has stood the test of time, appreciating its ability to be worn with virtually anything. The stiff front and softly rounded crown will not conform to your head as comfortably as the dad cap, but for specific styles, the baseball cap is the exact type that is asked for.

It is usually worn as part of the uniform for minor and major league baseball players. Moreover, traditionally, the front panel houses the team’s logo.

A fedora hat with a suit used to be a mainstay of the business world. But it has now broadened in appeal throughout its long tenure. To identify these occasionally famous men’s dress hats, find the indented crown with a lengthwise crease pinched near the front on the two sides, together with a soft brim of approximately 2.5 inches or more.

An appealing part of the Fedora is its versatility as a fashion hat for men. If you pair it with smart casual attire, a Kung Fu grip on personal style is essential.

The visor was once forced into retirement at the local court. But now, they are returning to the mainstream, with the acknowledgment of an uptick in trendy athleisure and activewear. The visor is an all-function hat with minimal style. Whenever you feel quite overheated during your workout, just grab a visor, and experience why it is the best men’s hat for working out.

The flat cap has a rounded top and a small, stiff brim up front. They are typically created from tweed, although there are other fabric types. Moreover, despite the history of the flat cap among working-class people, it has recently emerged as a dressy weekend wear for younger men.

Furthermore, if, as a man, you wish to wear a suit with a cap, the flat cap can be your first choice.

The beauty of hats is available for each occasion. The hat came may initially be a tough one to get into, but once you are in, you may no longer feel dressed without using one.

Now that you have been informed on the types of hats for men for every occasion, it is time to select your hat for your occasions now or later.

The Different Types of Washes for Denim Jeans

How to choose underwear for ladies who are big size?

Shop The Most Famous Brands From Zalandolounge’s Stunning Collection!