Learn about the come and take it Spartan flag 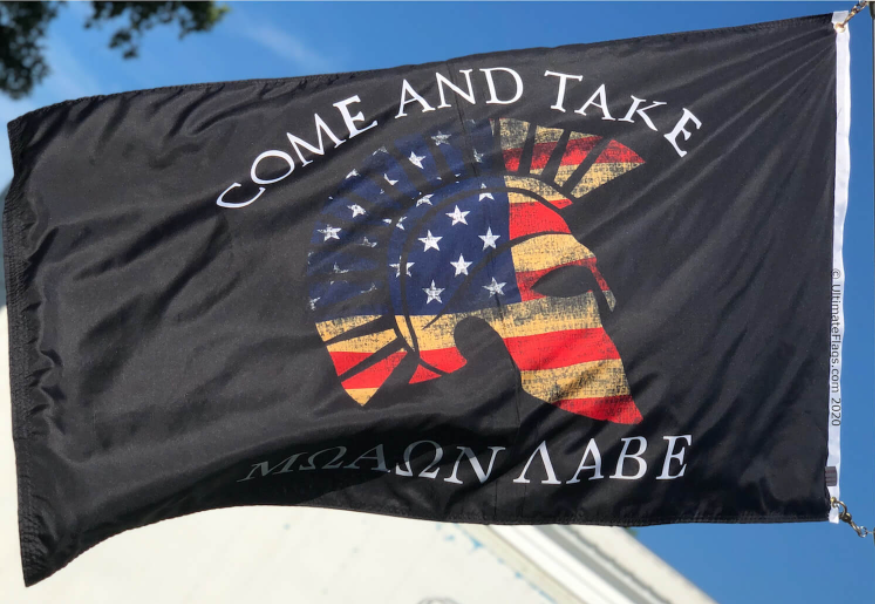 The come and take phrase is quite popular nowadays, especially among American second amendment activists. The slogan is usually a reminder to everyone of how American citizens value their right to have arms. Today, this slogan is not particularly a battle cry or a warning because it’s simply a symbol of patriotism.

In other words, this symbol reminds people how fortunate they are to live in a place where independence, freedom, and many more are still valuable and meaningful. Most people support this slogan by purchasing and displaying the Molon Labe flag. Besides, the Molon Labe is a pretty popular military slogan that the United States Special Operations uses as a motto as well as the emblem for the Greek First Army Corps. In this article, you will learn about the come and take it Spartan flag.

Come and take them

Come and take them happens to be the ancient Greeks modern translation of the phrase Molon Labe. In those days, Molon and Labe would be translated as come take because they didn’t like verbs with conjunctions.

And, the noun or subject in the phrase was usually removed during the Greek period. To the ancient Greeks, the two words come and take were used in the context of battle. It represented an honorable event that made Molon Labe become an inspirational phrase. This phrase has endured the passing of time.

Historically, Molon Labe appeared during the fight against Thermopylae in 480 B.C. This was the time when Leonidas of Sparta shouted this phrase to King Xerxes of Persia after Xerxes demanded the Spartans surrender their arms. There were at least 300 Spartans who were in the battle of Thermopylae. Unfortunately, they still failed to overcome the Persian army that has about 600,000 fighters. Keep in mind that the Persian army was considered to be the strongest army on earth at that time.

But the Spartans were courageous enough during the fight. As a result, this gave adequate time for the citizens of Greece to flee before the arrival of the Persian army. Immediately after, the Greek army was motivated and destroyed the Persian army twice.

Now, Molon Labe made a good impression on American citizens during the early 1800s. Therefore, the come and take phrase was placed on a flag in Texas, called Gonzales flag. This was during the fight that happened between the Mexican government and Texan colonists. But the phrase come and take it didn’t have the same impact as it has during the ancient Greek Spartans era. It that was included in come and take it was used to refer to a cannon that was offered to Texas from Mexico.

This gift was intended to help Texas citizens to defend themselves against Native American assaults. And, when the Mexican government attempted to reclaim this gift a few years later, the Texans refused. Instead, they told them that if they wanted it, then come and take it. This claim was solidified by the Texans coming up with a single star flag that has a cannon as well as the come and take it phrase.

15 Epic Travel Adventures to Inspire Your Next Trip